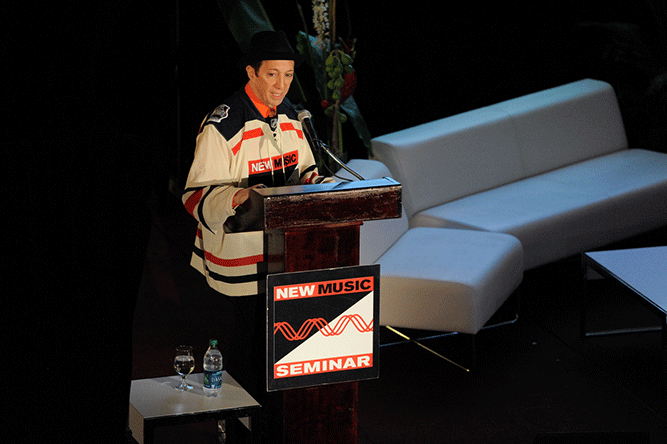 New Music Seminar continued to bring the best in music business to the Wyndham New Yorker Hotel this Monday. With a huge breadth of programming covering topics from streaming to touring to producing and everything in between, the hotel was abuzz with innovation in the second day of the three-day conference.

The day began with some wise words from New Music Seminar founder Tom Silverman. Appearing in a custom New Music Seminar hockey jersey, Silverman showed his support for not only the music industry but for NYC’s Rangers, as Game 3 of the Stanley Cup Finals was held later that night at Madison Square Garden right across the street from the conference.

Attendees packed the New Yorker Hotel’s Grand Ballroom to hear Tommy Boy himself discuss the current state – and future – of our music industry. From Billy Bragg (NMS 1982) to the Red Hot Chili Peppers (NMS 1989) to Macklemore (NMS 2012) to today’s ‘Artists On The Verge’, our audience was taken on an incredible journey through the extensive history of New Music Seminar.

We must have the courage and conviction to challenge our beliefs.

Instead of focusing on what is, focus on what’s next.

The music ecosystem is transformed by entrepreneurs with a passion for music.

[pullquote]No matter how big the industry is – growing or shrinking – you want the biggest piece of whatever pie there is.. And FM Radio can help you do that.

-Mike Huppe[/pullquote]SoundExchange President and CEO, Mike Huppe, discussed some important ideas regarding the significance and effects of commercial radio.  Though he doesn’t view it as absolutely necessary, Huppe does believe that commercial radio has been an undeniable force in the music industry. He claims that “no matter how big the industry is – growing or shrinking – you want the biggest piece of whatever pie there is. And FM Radio can help you do that.”

Huppe closed his keynote with this gentle reminder:

You shouldn’t have to give your music away for free. After all, radio needs YOU more than you need THEM!

It’s absolutely impossible these days to discuss revenue in the music industry without mentioning streaming.  But, with music streaming and subscription services still very much in their infancy, New Music Seminar’s “Turning the Stream into a River” movement, hosted Bloomberg reporter Joshua Brustein, who spoke with Denis Kooker, Sami Valkonen, Colin Rushing, and George White about their opinions on how streaming can reach full maturity.

-Colin Rushing[/pullquote]“Competition breeds innovation,” White stated, and the competition seemed to be focused on one locale: car dashboards.  With 60 million cars sold in the United States each year, and 16 million of those being new cars, it looks like the race to bundling and integration for streaming services will only become fiercer in coming years.  Rushing offered credit where it was due to his fellow player: “No one has done a better job than SiriusXM at getting on the dashboard.  Not only are you in a space where people listen to music, but in a place that tends to stay static.”  (The average age of a car on U.S. roads is 12).  When the elephant in the room was mentioned briefly (Apple’s Beats Music buyout), there was not much to be said, but a sense of anxious anticipation could be felt in the air. 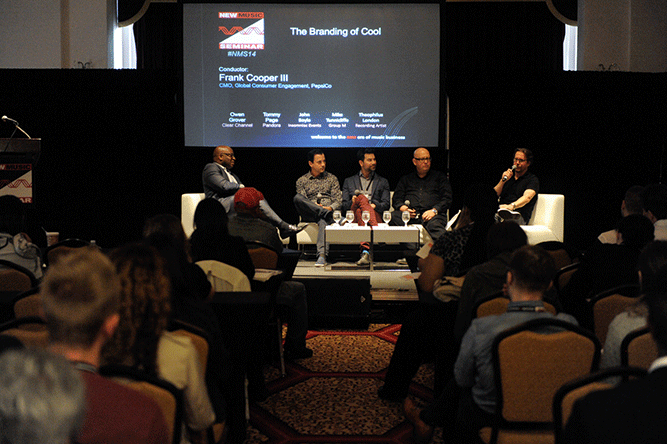 With the potential to greatly benefit both artists and businesses alike, the current view of branding was discussed from several perspectives during “The Branding of Cool” movement Monday morning. Players included Mike Tunnicliffe, Tommy Page, Owen Grover and John Boyle, and conductor Frank Cooper III. Each player described their company or service’s specific method of connecting artists and brands, such as Pandora’s custom brand created stations or Insomniac Event’s large interactive activation with Motorola including an LED screen where fans photos are shown and a “Candy Store” that concert-goers can create their own “candy” bracelets, a node to early 90s rave culture. However one main point seemed to continuously be mentioned, branding is dependent on the artist. For the most successful brand partnerships, the movement’s players agreed the relationship between the brand and artist must be organic because when the deciding factor becomes money – fans lose and in the end the brands lose.

The discussion began with a simple request: Please blink three times (to avoid any potential embarrassment) if you do not know what SoundExchange does.

For those in the audience who blinked, Glover and Berenson explained that SoundExchange is a not-for-profit organization that collects digital performance royalties from non-interactive services (such as Pandora, SiriusXM, iHeart Radio, etc.). The company distributes payments to record labels and artists, representing the entire music industry. In a space where artists and labels mix like water and oil, SoundExchange makes the impossible possible. 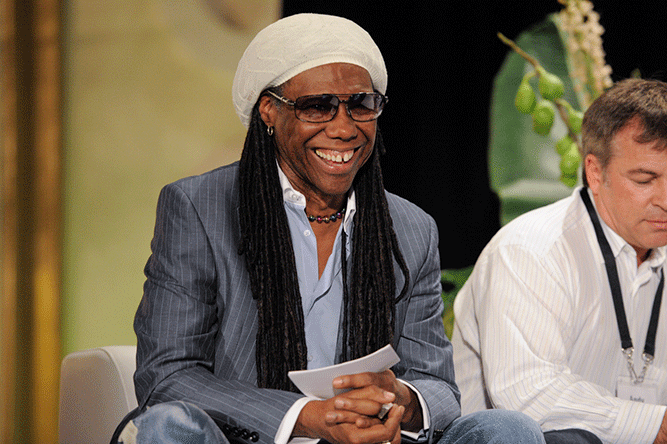 Then, the movement everyone had been talking about: The Producer’s Movement, conducted by superstars Nile Rodgers and Craig Kallman, anecdotal stories supplemented solid career advice, which provided for a carefree and fun atmosphere for NMS delegates in attendance.

Industry legends shed some light on their personal failures and successes in our erratic music business. Technological advancements come and go, but great music will always endure.

Tommy Boy Records President and CEO (and New Music Seminar founder) Tom Silverman noted to the audience, “When our businesses start becoming successful, we like to think about money and often forget about creation.”

Silverman continued with what he considers the three phases of the music business:

“Each phase shares equal importance.  It’s about the song. That’s what captures you.”