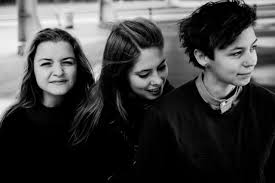 NMS headed down to Austin, Texas last week and amidst the corporate branding and big name performers, we were lucky to stumble upon some awesome new music. Today we’ve got two artists we ran into down South and can’t get enough of: girl-rockers Baby In Vain and Norway’s impossible-not-to-dance-to pop singer Samsaya.

Wednesday afternoon our friends at PledgeMusic presented the PMA Village, which included the all-girl rock trio from Denmark called Baby In Vain. These girls rock hard – think Savages but with a more raw, garage-rock feel. Although they may look like three sweet girls at first glance and yes they do have an Instagram comprised only of cute cat pictures, these girls are far from singing lukewarm pop or indie rock melodies. Baby In Vain’s grunge-inspired noise rock has dirty guitar riffs, detail-rich compositions and powerful vocals that combine for a hell of a band.

Make no mistake though, this is not just some gimmick band. Just because these girls are between the ages of 17 to 19 years-old and are playing in what typically is a male-dominated genre isn’t the reason to love them. This band holds their own regardless of girls or boys, or what age they are – those facts just make them that much more awesome on top of their talent. Check out their video for “Sweetheart Dreams” below.

It’s hard for an artist to get an unfamiliar crowd moving to their music, let alone in a convention hall room at SXSW. However, Norwegian singer Samsaya proved Friday that nothing is impossible. The singer and her band played a high energy set that began with maybe 10 to 20 seated listeners and ended with a crowd of over 100, most of whom were dancing or at the very least enthusiastically tapping along to the beat. While Samsaya creates a sound just as catchy as any Top 40 radio dance track, the singer is far from your expected modern pop cliché.

Blending elements of hip-hop, funk and soul, in addition to traditional Indian sounds such as percussion, Samsaya is creating a new breed of pop with songs that provoke emotion and thought while maintaining catchiness and danceability. Compared in sound to artists such as M.I.A. or Gwen Stefani, Samsaya’s music is really on its own level of greatness. Add in her live performance abilities and you’ve got yourself a talented artist who’s destined to be a super star.

Check out her track “Stereotype” above which had not only the convention center dancing but also the entire audience at SoundExchange’s party at Stubb’s later that night.

On The Radar: Little Racer