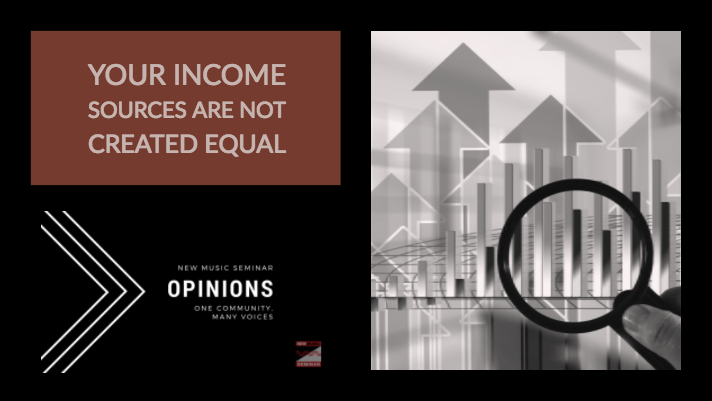 The views and opinions expressed in the Opinions articles are those of the author and do not necessarily reflect the official policy or position of New Music Seminar, and/or its owners, staff, partners, or sponsors. If you would like to submit an Op-ed piece for consideration, see our guidelines here.

With all the praise being rightfully heaped on streaming for single-handedly turning around the outlook of every music industry pundit, it feels like everyone should be going all-in on streaming. That may work for record labels, but diversity remains critical for working musicians. Chances are you, the musician, fall into one of two camps: either you’re suddenly making consistent checks every month thanks to an algorithmic recommendation, or you’re now making micropennies thanks to the decimation of downloads and CD sales. Fortunately, there are a lot of ways to make money with music now. So many, in fact, that one might feel like a fool for not pursuing every single avenue, extracting maximum value from every facet of a creative work. Blog posts abound with reminders to claim your setlists on ASCAP, set up a Patreon, do covers of the latest Top 40 hits for YouTube, or whatever else. All valid options, but I bet not every suggestion applies to you. Instead of getting frustrated that there isn’t enough time to do every single little thing to earn what amounts to pocket change, recognize that you’re probably very good at something specific and it’s probably worth paying for.

First, let’s be very clear that nobody is great at all things–not you, not the superstars, nobody. Consider last year’s highest paid music celebrities according to Forbes. There are the expected names–The Chainsmokers, Beyonce, Luke Bryan, Justin Bieber, Diddy–and then there are ones you might not expect, like Jimmy Buffett. Each of the artists appearing on the list relies on one particular income stream more than the others. For example, The Chainsmokers signed a lucrative DJ residency deal, Paul McCartney still banks big on the Beatles to this day, and Jimmy freaking Buffett is laughing all the way to Margaritaville thanks to extensive trademark licensing. While some opportunities feel like the domain of only the most famous, there are lessons to be learned here. It starts with identifying where your greatest strengths and your best assets are. Are you primarily a knob-twisting ambient electronic producer who lives for a textural sample? You’re probably not putting on the most compelling show without substantial lighting. Are you a former theater student with a flair for bombastic stage presence?

That’s simply not going to translate through an album alone.
Don’t feel obligated to pursue some “normal” part of a music career if it’s not the thing that drives you.

Once you’ve identified your greatest strength and put it into play, you can use it to lift the fortunes of the other stuff. Look, in all reality, it takes being extraordinary to break through the noise even for a niche audience. But don’t confuse being extraordinary with being pop-friendly. Jonathan Coulton made a career writing extraordinarily clever songs for self-professed nerds like himself. OK Go famously produced extraordinarily complex one-shot music videos, which corporations are now eager to sponsor. Pomplamoose recorded extraordinary arrangements of pop songs and posted videos to YouTube. (Jack Conte of Pomplamoose went on to co-found Patreon, hoping to support fellow independent creators.) These examples of focusing on a single primary and identifiably unique lane have allowed them all to tour, license music for TV, and enjoy lucrative brand partnerships. They did their own special thing and shared it with a like-minded audience. With that audience, all other things you do will be given more favorable odds.

Do your specific special thing, encourage your audience to support it time after time, and use that support to launch your records, or your merchandise, or your music videos, or your series of private invite-only black-tie speakeasy cocktail variety hours. It doesn’t require a hit record or a sold-out arena to make a million bucks. It just requires enough people who think your special thing is special enough to pay for.

New Music Seminar encourages conversation. Please share your thoughts below to add to the dialogue.

Sam Tall founded Under The Window in January 2011 after his first semester at New York University. Under The Window was founded with the purpose of developing a mission-driven creative strategy for early-stage musicians. UTW has managed the careers of Kevin Garrett (writer/producer for Beyonce, Justine Skye), Ryan Cassata (folk singer, international civil rights activist), Valley (recent signing to Universal Music Canada), and more, and has consulted for organizations like the Les Paul Foundation and Parallax Agency. Sam previously held positions at Downtown Music Publishing and YouTube Music and was the recipient of the ASCAP Foundation Joan & Irwin Z. Robinson Scholarship. You can find him in New York City where follows the mantra, “Art First.”