Artists On The Verge
Interviews

You don’t hear about many Navy officers who spend their free time writing and recording music, much less who go on to form a successful indie rock band. Dave Munro however, singer/songwriter and the driving force behind Boston’s Air Traffic Controller, did just that – now he and his band are quickly winning over the industry from every angle.

Enlisting in the Navy at 17, Dave worked as an air traffic controller during his deployment. In his off-time, he wrote and recorded four-track demos which he sent home to Boston on a regular basis.

When Dave’s enlistment ended, he returned to Boston to learn that, in his absence his music had attracted a large attention. So Dave did what any talented artist would do, and embarked on a mission craft the perfect six-piece band as a complement to his own songwriting skills – Air Traffic Controller (ATC) was born.

Dave’s well-crafted lyrics flow smoothly throughout each song, reminiscent of The Decemberists’ Colin Meloy. His voice provides the perfect complement to the bands cheerful sound of strings, keyboards, and percussion, yet is almost too captivating that you nearly miss the talented storytelling within his honest and autobiographical lyrics. It’s this important element that prevents the band’s sound from coming across too pop or cliché and leads listeners to the conclusion ATC isn’t another indie band with a catchy-hook.

[pullquote]We learned quickly in this business, don’t expect anything, and don’t lose hope.[/pullquote]

In 2009, ATC released their debut album The One with the band’s musical hero, LA-based singer/songwriter and record producer Bleu. The album received critical praise and led the way for the group to win titles like, “Best Indie Rock Act” at the 2010 Boston Music Conference and nominated for MTV “Best Break Out Artist” of 2009.

The band used a Kickstarter campaign to raise over $12,000 to fund their second album NORDO. Released June 2012, NORDO showcases each band member’s wide range of musical talent, including a 40-piece orchestra composition by Steve Scott on “Blame”  and Casey Sullivan singing two duets (“You Know Me”, “Any Way”.)

ATC exceeded everyone’s already high expectations and won an Independent Music Award for Best Indie/Alt Rock Song that same day for their song “You Know Me”. Not too bad, right?

Even big players in the music industry are taking note of the band’s emerging talent and trying to get a piece of the action. A booking agent from Artists Group International (AGI) loved their sound so much she asked the band to sign with them on the spot, following their NMS showcase performance. AGI is known for booking legends like Rod Stewart and Metallica, however recently they’ve shifted towards working with more up and coming buzz bands – just like ATC. The band also just signed an exclusive licensing deal with All Media Music Group (AMMG), known for representing artists such as La Roux, Josh Radin, among others.

I spoke with ATC’s Dave Munro and Steve Scott and talked with the guys about their recent success, experience at New Music Seminar 2013 and how Boston’s unconditional hometown love isn’t just for the city’s sports teams (artists take note!) – read the full interview with Air Traffic Controller below.

Be sure to check out ATC’s live performance at Rockwood Music Hall NYC during New Music Seminar 2013 here.

Lindsey: What was it like to receive the AOV 2013 award from the legendary Tom Silverman himself?

Dave:  Such an honor!  We’ve heard so much about Tom Silverman not just how amazing he dresses, but more importantly his passion for music.  As he handed me the shiny award, he held it up so I could see my own reflection in it, and said something like “look it’s like a mirror, you did this.”  It was an awesome feeling. 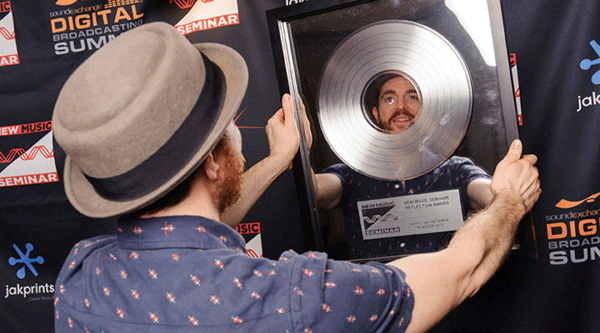 You won another amazing award earlier that morning, how crazy did it feel to sweep awards like that in one day?

D:  We woke up to find out we had won an IMA (Independent Music Award) for our duet “You Know Me”, so we were already excited as hell arriving at NMS.  Although it was a completely separate event and award, I did feel a little guilty for getting so much love in one day.  The guilt faded pretty quickly, when Gibson handed us a brand new guitar.  This might be the best day ever!

D: No, we learned quickly in this business, don’t expect anything, and don’t lose hope.

What was your overall experience at New Music Seminar and being a part of the ‘Artist On The Verge’ project this year?

Steve: We had a really positive experience all around at NMS this year. The kind of innovation and forward thinking that this kind of gathering encourages is just so important for the music industry. I heard some really good ideas and learned a lot at the sessions I attended.  But also having Air Traffic Controller perform twice, and then get selected as this year’s ‘Artist on the Verge’ just made the whole experience all the more special and memorable for us.We feel honored just to have been performing in the midst of all of those other great musicians and industry representatives.

How did all of you meet to form the current band?

D:  After completing my Navy enlistment, I returned home and built a recording studio with my brother/drummer, Rich Munro.  We recorded dozens of demos and one reached one of our musical heroes, Bleu, who quickly got onboard to produce our debut album.  Along came Steve Scott, who approached me after a local show saying he’d love to play in the band in some way.  Little did I know, he was a would become a vital part of ATC, handling lead guitars, keys, various instruments, writing arrangements , and even conducting a 40-piece orchestra on our latest album, NORDO.  Casey Sullivan I’ve known for a long time.  When she was just 14, her dad would take her to my hometown bar on open mic night where she would sing her own songs.  Later, she would come to our shows to sing and play banjo as a special guest, but once she took on the role of bassist, she became a integral player in ATC. The band connected with Boston’s classical music scene by reaching out to colleges and forming string quartets for ATC’s shows and recordings. This led to strong bonds with violinists Alison Shipton and David Wong, violist Kiara Ana Perico, cellist Brent Selby and many more.

[pullquote]Remember, Bostonian’s are known for cheering on the underdog, and that’s was ATC in the Boston music scene – a band they loved that were frustrated wasn’t “making it big”.

They believed in us enough to put money on it that this was going to be awesome.[/pullquote]ATC has a really strong local following, how many of you are from Boston or have spent time there? How did the band cultivate such a solid support and following from not only fans in the area but also local media, especially Boston radio stations like WERS and WXRV?

S: The whole band is from Boston area, except I grew up in NY. I’ve lived in Boston for so many years that I just tell most people I’m from here. This city’s reputation for getting behind its artists (and sports teams) holds true, and we are so lucky to be experiencing it. It’s been a grassroots operation from the start and we’ve been handed so much support from local media, radio, and even Mayor Menino himself! I don’t think it’s anything we said or did to deserve such hometown spirit, I think they all just like our music.

Dave notes how he was “floored to find out one of my musical heroes wanted to produce us”, referring to producer & LA-based singer/songwriter Bleu. What was it like working with one of your musical heroes?

D: It totally blew my mind when he called me about making my first record, but Bleu was so personable that it was easy to get right to work without being intimidated. We like alot of the same music, and I’m literally a “fan” of his music, so of course I liked the majority of his ideas while recording. So much thought went into what NORDO should sound like. It was an exploration of what ATC had become and could become, focusing on what we have within the band and what our members have access to. The plan came together beautifully, with all the happy accidents of course. We’re really proud of NORDO and that we got to make it with Bleu. He has become a close friend to the whole band, but he’s still our hero.

To help produce your second album NORDO, you ran a very successful Kickstarter campaign that raised over $12,000. About how long did it take you guys to raise the money, and how did you work on promoting the campaign and getting the word out? Did the $12,000 from the campaign adequately cover the production and promotion costs or did you guys have to use your own money?

D: We had a low goal of $5K in 30 days. We didn’t know what to expect, we just wanted enough to get started. Our goal was exceeded within the first 12 hrs and we continued to promote the campaign by constantly letting our fans know how much they have helped us accomplish. One thing we did was, we created a silly cartoon airplane graph that was climbing higher and higher as we raised more. New graphs were made, showing the plane climb through the clouds, and eventually into outer space. I think it gave our fans something to watch daily and root for, remember, Bostonian’s are known for cheering on the underdog, and that’s was ATC in the Boston music scene – a band they loved that were frustrated wasn’t “making it big”. They believed in us enough to put money on it that this was going to be awesome.

S: The $12K is definitely what made it possible to make this record, but ATC did need to put in more money that we earned playing shows to be able to afford production and promotion.

So as Kickstarter success story, how do you think crowdfunding platforms should be designed in order to work most efficiently artists, consumers and businesses alike?

S: Big fans want your stuff, they want it first, they want it personalized, and sometimes they want even more of the stuff you can offer. You’re able to give fans another way to connect, a fun and unique experience where everyone benefits in the end. It’s a creative pre-sale. Crowdfunding is new to us, but it’s pretty simple, and we don’t see any need to change it.

What can we expect in the near future from ATC? More touring, working on another album?

D:  With all the help we won from NMS and sponsors, we’ll be able to stay the course and continue pushing our latest record as well as creating some new stuff for our current and future fans to chew on.

On our list of things we’re planning now is; touring in the U.S. and U.K., a new music video, and a recording session at Guilford Sound in VT, which is one of the biggest things we’re taking home as Artist On The Verge.

Keep an eye on www.AirTrafficControllerMusic.com for what’s next!