On The Radar: GEZAN, The Faint

Today we’ve got music from two artists that need to be a part of your collection ASAP: Japanese rockers GEZAN who may just be Japan’s best kept musical secret and we reminisce the early days of Saddle-Creek Records as The Faint debuts a new track from their upcoming album.

You always find the greatest new artists when you’re least expecting it – which is exactly how I found Japanese rockers GEZAN last week where they played at Grand Victory in Brooklyn, NY. For those of us who never could get over the 2001 break-up of At The Drive-In, finally a band has arrived to fill that void.

Screeching guitars with intriguingly off-beat tempos, the Japanese band is psych-rock and punk fused in its finest. Although GEZAN shows strong similarities with artists such as Omar Rodiguez-Lopez (At The Drive-In, The Mars Volta) and The Refused, they definitely have gone above and beyond to create their own unique style in their entire brand – music, video, style, live shows and more. 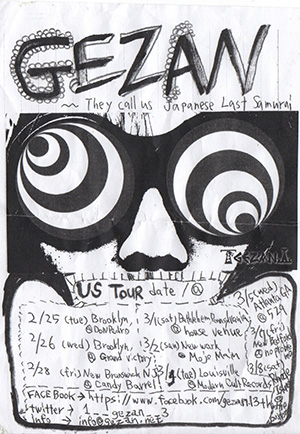 However GEZAN isn’t all adrenaline fueled guitar breakdowns and controlled chaos, their song “And Bombers Scab” (which I’m unsure if Google translated correctly, but you can watch the video here) show a side of the band reminiscent of the mid-90s indie/emo scene that sounds similar to The Get Up Kids.

In short, this band is beyond awesome and are ten times greater live. Check out their video for 『癲癇する大脳たち』 (or “cerebral us to epilepsy” which may not be an accurate translation) above.

You can catch them at SXSW on Wednesday March 12 at Quantum Lounge, this is one band you cannot miss admist the chaos of SXSW! They have additional US tour dates you can view below on the flyer I picked up from them last week or check out their Facebook or Twitter – and yes, that is their official flyer.

Do you feel nostalgic when you hear the words “Saddle Creek”? Well exciting news – The Faint is back!

Before everyone was a DJ and indie rock with danceable beats were cool, these guys were already on it and doing it better. Since 1995, The Faint have been crafting new styles for the dance floor and mixing new wave, post-punk and similar styles into their indie-rock based dance tracks.

Last week the band released a video debuting the first single off their upcoming sixth album Doom Abuse, out April 9 via SQE. The first release since their 2008 split, “Help In The Head” brings us back to The Faint’s sound circa 1998-2000, reminiscent of their album Blank-Wave Arcade but with a more refined sound and production. The band has always been disinterested in making anything but music driven purely by their own inspiration and the new single feels as if they’ve gone back to that mindset, which should make for an amazing album.

So as you count the days till April 9 and the release of Doom  Abuse you can watch the video for “Help In The Head” above.

Along with the new album, The Faint also announced a 2014 US tour with several dates. Although they may be known for their danceable tracks, the band performs as a live rock band which is not to be missed!

Make your friends envious of your musical taste with On The Radar sounds every week.

See more On The Radar here.

How Swedes Do New Music Seminar