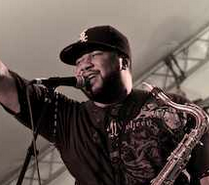 May 30, 2013 (NYC) –  The Soul Rebels  have just announced that they will headline New Music Seminar’s 2013 Opening Night Red Carpet Event. The eight-piece brass, percussion and vocal ensemble blends rock, hip-hop, funk, R&B and soul for a unique sound that has propelled them to major festival stages around the world.

The Opening Night Party is on Sunday, June 9 at Webster Hall in New York City.  It kicks off the New York Music Festival, which continues June 10-11 at Webster Hall and at various venues throughout Manhattan’s Lower East Side. The Festival is done in conjunction with New Music Seminar, a conference of over 150 music industry leaders, which takes place during the days of June 10-11 at the New Yorker Hotel.

New Orleans’ The Soul Rebels Are Headlining  the Opening Night Party for 2013.

After being rained out as a headliner for Googa Mooga, The Soul Rebels finally will be able to bring their signature sound to New York City. They recently released their latest album, Unlock Your Mind, on Rounder Records. They’ve landed on Conan (TBS), Later with Jools Holland (BBC), Sunday Night Football (NBC), as the house band for the 2013 NFL Honors Awards (CBS), and more. They’ve shared the stage with some big names: Metallica, Green Day, Trombone Shorty, and David Stewart of the Eurythmics to name a few. They’ve also been on bills with Kanye West, Snoop Dogg, Alabama Shakes, Cee Lo Green and Arcade Fire. Their performance on June 9 will be the last stop of their 2013 East Coast Summer Tour.

Click here to read the official press release from May 30, 2013 on The Opening Night Red Carpet Party featuring The Soul Rebels.

The event will also feature some other up-and-coming acts. Ahmir, who have skyrocketed to the #1 most popular R&B group on YouTube, recently performed their new single War on Late Night with Jimmy Fallon (NBC). Brothers Joe and David Stark make up the rock duo of Baby Bee, also hailing from Louisiana, who will deliver stripped-down rock from their first full-length album The Shaker, released earlier this year. 2AM Club, an alternative pop, R&B and hip-hop group, are preparing to release their second album on RCA Records later this year after their 2010 success What Did You Think Was Going to Happen? DJ Sav and Mystereo will also perform.